Every time you walk out of a movie theatre, you tell yourself, “I can do a much better job than the guy who made that movie.” So the question is, why don’t you? With HD filming on DSLRs, easy-to-use editing software and platforms like Youtube or Vimeo, you could be the next film director to watch out for. And on a budget too. All you need is an idea like no other and the passion to see it through.

“Pick up a camera. Shoot something. No matter how small, no matter how cheesy, no matter whether your friends and your sister star in it. Put your name on it as director. Now you’re a director. Everything after that you’re just negotiating your budget and your fee.”
– James Cameron

Let’s get one thing straight. Film making is nothing like taking a photograph. With still pictures, the work pretty much begins and finishes when you release your finger on the shutter. Film making is a whole different ballgame. The entire process is split into three stages – Pre production, Production and Post Production. This blog post takes you through some of the steps of Pre-production.

Step 1 – Understand why you are making the film

What is your intention behind making the film? Is it a home video to be sent to your family members? Is it a client testimonial video to be put up on a corporate website? Is it a documentary showcasing a topic close to your heart? Is it a short fiction film made for a film festival? Or do you want to be the next Youtube sensation and make videos like Superwoman? Once you have figured out your motivation and reasons for making the film, the rest falls into place.

Step 2 – Put together a team

While it is brave to attempt a solo project, a reliable crew can help you achieve results faster. You need a director whose vision and ability to lead a team ensures the project runs smoothly. You need a cameraperson or in some cases, a sturdy tripod, to film the project. You need someone to record audio and set up the sound especially if you are shooting live or outdoors. You also need a scriptwriter who writes the narration/dialogues for your film. A narrator or voice over artist comes in handy if you are making a documentary. And your most important ally will be the editor who helps you with the post production processing and mixing of audio.

“A Great Movie Evolves when Everybody Has the Same Vision in Their Heads.”

Another great advantage of having a team is that it gives you perspective. Involve all your team members in the script writing process and get their inputs. You never know what great ideas may come out of collaboration.

You’ve seen the short synopsis given at the back of a book or a DVD, haven’t you? You need to write down a short and crisp description of your film before you begin. And while a book will not give away the ending, your synopsis can do that since it is meant for your perusal only. This is one of the most important steps because it will help you write down effectively what you are planning to film and helps you focus on what you want to create. This synopsis will also come in handy if you are looking to get sponsors for your film. They won’t have time to go through your extensive storyboard but a concise synopsis may do the trick.

Step 4 – Writing down the Script

A good film is often let down by the lack of a sound script. Which is why you must devote all your attention and energy to getting this step right. The script is the Holy book that will guide and direct you on your project. The script includes details of characters, locations, scene descriptions, sound/music and dialogues. Every minor detail about your movie is noted in the script.

The script tells your story and is usually divided into the beginning – where you introduce the characters and set the base for the story, the middle – where most of the action occurs to help the story move forward and the end – this is usually the climax where all the threads of the movie are tied up.

For a documentary or a corporate video, the script will include the words for any voice-over, narration or subtitles and the general structure of the video with shot-by-shot detailing.

Step 5 – Draw up a Storyboard

Now comes one of the most challenging part of making a film. Challenging yet fun. This is where your creativity comes into play. Before you delve into your shooting, you need to put down your vision to paper and create a storyboard that mirrors what the final product will look like. A storyboard is pretty much like a comic book with drawings within panels that narrate the story. Under each panel, you mention the following:

Type of shot: These are classified into many categories, depending on camera placement or field size
Action: It describes what the subject is doing or what the shot is showcasing (just a few words)
Timing: No of approximate seconds the shot needs to last
Sound: Special notes on background score or ambient sound, if any

One doesn’t need to be a Picasso to create the pictures in the Storyboard. If you want an elaborate one, go ahead and draw as lifelike as possible with minute detailing. And if you want to take the easy way out, doodle stick figures and basic shapes.

The Storyboard simplifies your work process during the production period. All you need to do is to follow the storyboard and your filming will be a piece of cake. Of course, one can always make changes to the script or angle of the shot during the filming. But the Storyboard still makes a handy guide to follow.

Step 6 – Getting your resources together

Making a film is no easy task. You will need to borrow equipment, get props, acquire permissions, hire actors, so on and so forth. Before you begin shooting, make sure all your resources are in place.

Shooting in public places requires permission. This can be attained from the nearest Police Station. You will have to write a letter stating your intention, giving details of your project and ask for a specific time slot for the shooting. Some places may require you to pay for permission. Keep all these things in mind before you actually head out for your shoot.

Most photographers are not stopped from shooting in public places. Given that you may be shooting with a DSLR, it is easy to come across as a photographer. However the moment you introduce a tripod to the scene, chances are you will be asked to produce the requisite documents and permissions. So, go prepared.

Once you have your script and Storyboard in place, you need to create a Shooting schedule or a projected plan of each day’s shooting. This plan gives details of location and equipment for each shoot making it easier for you to coordinate. Imagine you get permission to shoot in a location for only three days but your script mentions the location at different stages, then you can simplify your production by shooting from different pages of the script continuously on three days.

So here you have it. Follow these 7 steps in Pre production to make life easier during production and post-production. Scorsese was right when he said “If you don’t put the time in during prep or you cut corners around the necessary equipment, you’re going to put the time and money in during post and hope that you come out with maybe a silk purse that may be a really jazzed up sow’s ear.” 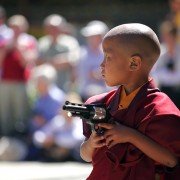 Want to join the discussion?
Feel free to contribute!

Faces of Bhutan
Scroll to top